Seattle, Washington – Seattle builders Build Urban (www.buildurban.com) recently tried a different kind of weather-resistive barrier in a single-family home it constructed in the city’s Wallingford neighborhood. The home, to be built on spec with investor funding, was designed to conform to Built Green 5-Star, the highest rating under the standard, requiring certification by an independent verifier. Tadashi Shiga, owner of Evergreen Certified (www.evergreencertified.com) and Northwest Energy Star and Built Green verifier, was selected to evaluate and certify the project home.

An air barrier is needed to block air leakage and keep outside moisture out. In climatic regions where homes are prone to vapor drive, it’s also important to enable moisture vapor produced indoors to pass to the outdoors, without condensing. This calls for a vapor permeable air barrier.

In an effort to improve thermal performance when using a traditional house wrap, architects and certifiers often apply a spray-on sealant to the inside of the wall structure prior to installing insulation. Instead of this approach, the Build Urban team chose to use Henry Company’s BlueskinVP™, a fully adhered membrane that serves as both a weather-resistive barrier and as a vapor permeable air barrier. BlueskinVP comes in peel-and-stick rolls that are applied to the entire exterior surface of the building, creating a seamless, fully bonded envelope.

“With BlueskinVP, we can seal all the seams of the bottom plates and the mud seal plates, as well as the sheathing, so you have a continuous thermal building envelope with no leaks,” Shiga points out. “And because it’s fully adhered, it seals around nails and other protrusions. Any air that might sneak in can’t migrate under the air barrier into the structure.”

Build Urban principal Ed Gallaudet says one important difference became quickly apparent during construction. “With BlueskinVP, we didn’t have to do any of the air sealing on the inside that we normally have to do to achieve Built Green 5-Star certification. That’s a two- or three-day process that we didn’t have to do,” he says, noting that this frees up the interior for trades working on electrical, plumbing, and mechanical systems. “That took some steps out of the critical path for the interior, so we were able to get to drywall faster.”

Putting it to the test

As part of the green certification process, Shiga performed a blower door test. With the home entirely sealed, a powerful fan is mounted in an exterior door frame. When powered up, the fan evacuates air from the home, creating a low pressure environment. An air pressure gauge on the assembly precisely measures the rate of air exchange in the home.  This is often expressed as air changes per hour at a specified pressure, usually 50 Pascal, or ACH50.

Shiga explains that the Washington State Energy Code (WSEC) calls for measuring specific leakage area (SLA), the airflow rate divided by the area of the building envelope. To meet code, SLA must be .0003 or less—roughly equivalent to 5 ACH50. Northwest Energy Star (and Built Green 5-Star) certification requires 4 ACH50 or less.

That tightness translates into superior energy efficiency. “This all comes down to saving homeowners money on their utility bills,” Shiga says. “With a truly high performance home in the Seattle area, your heating costs will typically be lower than your water and sewer rates.” 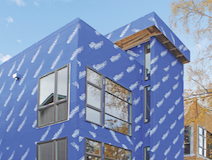