Salt Lake City International Airport (SLC), which serves more than 24 million travelers a year, is preparing for decades of growth with the construction of an entirely new airport. The $3.6 billion multi-phased construction project is the largest in history for the state of Utah, as well as one of the nation’s largest aviation projects in years. It is also the first entirely new airport built in the United States in the 21st century.

Marc Ribar, Vice President, Engineered Wall Systems, installer of the air barrier systems, noted, “The range of solutions Henry offers made them the partner of choice for this project. Because Henry offers different solutions to suit a variety of wall types, we knew we could pinpoint just the right air barrier for the different substrates we were working with. And you can imagine how involved and challenging the trade coordination is for a project of this size. The SLC team needed to feel confident that the air barrier system we chose would have long-term durability and resilience.”

Ideally suited to the task were the Blueskin® self-adhered and Air-Bloc® fluid-applied air barrier systems from Henry. Henry Blueskin VP160 Self-Adhered Water Resistive Air Barrier and compatible accessories were selected for use on the airport’s South Concourse, and Henry Air-Bloc® 17MR Fluid Applied Vapor Permeable Air Barrier and accessories were selected for use on the new parking garage. Blueskin VP160 sheds bulk water infiltration while permitting vapor to pass through, allowing walls to drain and substrates to dry. And its continuous plane of air-tightness will help improve the Concourse structure’s thermal performance.

Air-Bloc 17MR was chosen for its vapor-permeability and sprayability at temperatures as low as 20 ºF and, most critically, for the effectiveness of the fluid applied membrane to accommodate the brick ties already in place on the parking garage. “Air-Bloc 17MR was a great choice to assure a tight seal around each tie,” said Henry Western Regional Manager Travis Sims.

Work to install the complete air barrier systems began immediately in October 2017, when the first roll of Blueskin VP160 went up on the South Concourse. The total installation covers some 510,000 square feet of exterior wall surface.

The diversity of air barrier systems offered by Henry, plus dedicated support from its local and national teams, were decided strengths for this intricate project. “For the SLC design and construction partners, having Henry as a one-stop source for both products, along with dependable on-site project support, was a big advantage,” said Henry partner Jim Sheltmire, D7 Weather Protection Systems.

“We were willing and able to put a broad team effort and superior technical assistance into the project from both the local and national teams which set Henry apart from other providers. The teams stayed very close throughout the project. Henry technical support flew in to complement the strong local team, conducting inspections and providing support throughout the schedule. Henry was clearly committed to the success of this installation.”

As work on the South Concourse wrapped up in mid-2019, Henry began Phase 2 work to apply an additional 170,000 square feet of Blueskin VP160 to the new North Concourse, scheduled for completion in mid-2020.

Thanks to the team effort and robust set of solutions from Henry, the new Salt Lake City Airport heads into the next generation with durable, trusted air barrier systems that meet the highest industry standards. 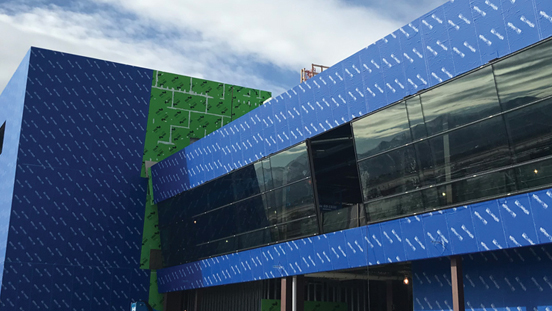